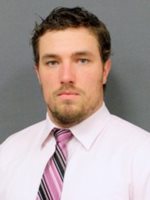 FOREST CITY, Iowa – The Waldorf hockey team is sending one of its alumni into the ranks of the professionals.

A three-year captain for the Warriors who graduated in May with a degree in Business and Sports Management, Jeff Bartel signed a professional contract with Hallefors IK in Sweden earlier this month.

“We are proud of Jeff for the hard work that he put in here in his time at Waldorf to give himself this opportunity,” Warriors coach Brett Shelanski said. “His work ethic and love for the game will make him a success and a great addition to Hallefors.”

Located in Hallefors, Sweden, the team plays in Sweden’s Division 3 league, one of the premier professional leagues in the country, and last winter Hallefors IK was one win away from being promoted to Division 2.

The native of Steinbach, Manitoba, the 5-foot-11 defenseman began his four-year career at Waldorf in the fall of 2014 and established himself as one of the premier back-line players in the American Collegiate Hockey Association, earning All-American his junior year (2016-17).